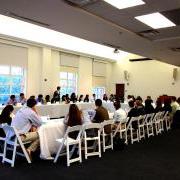 The Parents Council of Washington hosted its annual Student Leader Breakfast on Wednesday, February 13, 2013 at the Georgetown Preparatory School. Fifty students from the junior and senior classes of twenty-five Parents Council of Washington member schools attended and participated in the event. Dean of Students of Georgetown Preparatory, Mr. Chris Rodriguez, welcomed the students and encouraged them to learn from each other and exchange information to provide important feedback to their school communities on the challenges they are faced with today. Parents Council Board Member, Ms. Fran Barnes, opened the program, explained the agenda and introduced former Parents Council Board Member, Ms. Mary Cohen, as moderator of the student discussions.

Six topics were planned for the main group setting:

Discussion on how students felt they balanced school, homework, sports, extracurricular activities and college applications mixed with family time, down time and getting enough sleep. Students expressed that they managed and handled time constraints and stress well for the most part. Many agreed that teachers were generally understanding and flexible, but that falling behind in class work can quickly happen with one missed day. Creating a relationship with teachers and advisors was a key component to success as well as providing mandatory study halls or special programs offering guidance on combating stress and strategies to better manage the academic and athletic work loads.

Ms. Cohen highlighted that many athletic and political cheating problems are occurring in public today and asked the students whether cheating is taking place in their schools at the academic or sports level and whether schools were handling any instances appropriately. An overwhelming majority indicated that academic cheating was taking place in their schools and that administration was not consistently addressing or disciplining the issue. Cheating predominantly centered on homework copying or looking up answers on Google. There was an agreement that stress created pressures and students felt a misunderstanding of what cheating or plagiarism entails was present mainly at the freshman grade level. Student run Conduct and Review Boards, Advisory Councils and Honor Codes were mentioned as used widely in the schools, yet penalties were made randomly under unclear policies or rules. Simple violations led to the same punishment as major offenses. The consensus was that schools needed to stress the notion of personal integrity and open communication.

Most students shared that schools should be concerned, hold students accountable and discipline for behavior off property, yet expressed that not enough responded or intervened. According to most students, the entire school community is affected and impacted directly in a negative manner. Students should respect and represent their schools at all times to protect the reputation and image of the student body outside of school hours. In some cases, students felt that schools should only be responsible for notifying parents about incidents and allow families to handle the consequences necessary.

Sense of Connectedness with Administration and Teachers

There is an overall connection established, an investment made in them and support generated. There were comments about faculty needing to be more open minded about stereotyping and that with students showing more respect through more positive, responsible actions or by developing better relationships with the administration and faculty, teachers could see the potential in every student and be helpful with breaking the mold for students to grow and change effectively.

Students were asked about the amount of time spent plugged in, what the preferred method of communicating with friends was and whether there was a concern about the permanence of internet postings or digital footprint tracking. Facebook profiles, texting and Skype were all popular methods used to communicate between friends. It was noted that it would be a hardship for students to give up electronic devices for one week. Students admitted to posting negative comments on social media sites that would have been left unsaid in a face-to-face conversation. There was a fear of missing out on information expressed that prompts students to constantly check email and social media, however prioritizing before logging on, self-disciplining and thinking about the consequences of permanent digital records were found to be important and something that most felt needed to be worked on.

Students were asked about the types of substances used and how schools were responding to problems. Drinking was the number one substance abused especially at weekend parties with some reporting that smoking pot has become more widespread with students in the senior classes. Schools have taken action by implementing required programs for freshmen, but these seminars should be repeated in the upper grades. Student led group meetings, replacing rigid policies with educational classes about addictions to encourage students to seek help or look out for each other instead of imposing severe consequences or punishment should be the schools’ focus and would prove to be more effective.

Following a break in the large group session, four small groups were organized. Ms. Cohen presented each group with a series of written questions to select from and discuss freely on their own for the remainder of the morning session ranging from school rivalries, diversity and homosexuality, socialization outside of school boundaries, male/female dating relationships as well as the line between keeping a confidence and keeping a friend safe. A few groups had enough time to expand into open topics of their choice including more on the subject of alcohol and time management, social differences, removing privileges and/or traditions and students’ voices.

2013 Best Practices Forum: The Use of 21st Century Technology in Our Schools: Peaks and Pitfalls2013 Middle School Student Leader Breakfast
Scroll to top